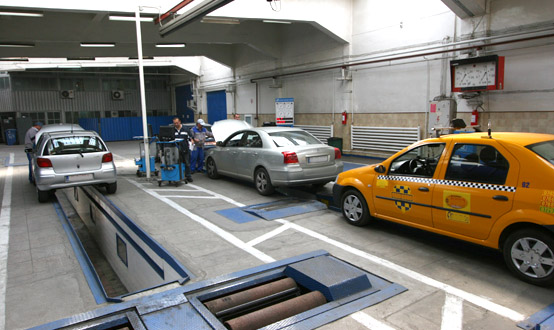 The department of Individual Approvals and Technical Inspections (hereinafter referred to as D.I.O.T.I.) represents such entity of the Registrul Auto Român (Romanian Automotive Register) whose activities address to – such as the title suggests – particularly to every road vehicle, which entails that in most of the cases the identification of the vehicle is absolutely necessary.

As interface of the Registrul Auto Român (Romanian Automotive Register) with the holders of vehicles, the activities of D.I.O.T.I. are carried out both in Bucharest, by means of two locations, as well as in every administrative town center. This was performed with significant investments, both human resources and financial investments, but allows now the unitary performance of certain quality services appreciated including by the representatives of certain similar organizations of the European Union.

By the date of the adhesion of Romania to the European Union, the individual approval has represented the main activity of D.I.O.T.I. Now it addresses only to the vehicles which do not have a European type approval, therefore to the ones which usually come from countries which are not members of the European Union. The individual approval is a legal condition for the certification of the vehicles and represents the procedure by which D.I.O.T.I. proves the fact that a certain vehicles fulfills individually the constructive conditions and the technical status conditions set out in the applicable regulations. Practically, the individual approval is extremely important by means of the nature of its consequences on traffic safety, as it represents that technical filter which allows the exclusive registration of the vehicles which are appropriate for the approval of their rolling on the Public Romanian roads. The successful conclusion of the individual approval procedure is materialized by means of the issuance of the Vehicle Identity Card (VIC). D.I.O.T.I. includes in the Identity Card the technical data and the data for the identification of the vehicle and afterwards the registration authority includes the successive holders thereof. The Vehicle Identity Card can be issued only for the vehicles which can be identified, respectively the ones for which the representatives of D.I.O.T.I. establish a valid identification number.

The vehicles which have last been registered in a state member of the European Union and the configuration of which has not been modified shall receive the identity card without being subject to the individual approval, since the approval conditions are now similar to the ones of the European directives and regulations and they are deemed to be fulfilled due to the fact that they are now similar with the ones of the European directives and regulations and due to the fact that vehicle comes from the European Union. Nevertheless, since they are before their first registration in Romania, these vehicles are subject to the activities of certification of the authenticity of the elements of identification and of the support of the document proving the prior registration, as well as to the activities of inspection of their technical condition. The change of the mentions from the identity card is determined by constructive changes brought to the configuration of the vehicle, by the supplements of the data of the Identity card or by administrative provisions.

If the identity card is lost. stolen or destroyed, as well as in case of the refusal to hand over the identity card on the occasion of a forced execution procedure, refusal ascertained by an officer of the court, the D.I.O.T.I. representatives may issue a duplicate of the initial identity card of the vehicle. Such activity does not entail the presentation of the vehicle, and the Identity Card is issued only based on the registrations of the IT system of the Registrul Auto Român (Romanian Automotive Register).

When the space destined to the notes regarding the characteristics of the vehicle or the identity data of the holders, in case of the replacement of the body/chassis, in all the cases when the car is granted a new identification number, as well as in other situations, the representatives of D.I.O.T.I. may issue a replacement of the initial Identity Card of the vehicle, after the identification thereof.

The operations for the verification of the technical condition of a vehicle shall be an integral part of the individual approval activity, but they are also carried out independently, within the activity for the reacquiring of the registration certificate withheld by the Traffic Police either for certain technical malfunctions that have been found or for the lack of the Technical Periodic Inspection within the validity term. The equipment of the inspection lines of the Registrul Auto Român (Romanian Automotive Register) and the training of the personnel of D.I.O.T.I. which operates there make this activity a standard for the entire network of authorized inspection stations.

The same strictness applies to the activities which refer to certain special categories of vehicles, such as the ones destined to the transport of certain dangerous merchandises, perishable merchandises, the vehicles approved for the transport in a taxi regime as well as the ones destined for driving lessons. All the vehicles of these categories can be used according to their specific destination only if they comply with the approval conditions imposed by the applicable legislation, fact proven by the issuance by the representatives of D.I.O.T.I. of the approval certificates.

For the vehicles destined for the transport of travelers for tourist purposes or on internal and international routes with regular traffic, the representatives of D.I.O.T.I. issues certificates of classification by categories of comfort and supplies the proof based on which the certificates of classification by stars are obtained from the part of the Registrul Auto Român (Romanian Automotive Register).

The certification of the authenticity is the most recent activity of D.I.O.T.I., initiated in 2002 and which intends to perform the assessment of the status of the elements which determine the identity of a vehicle. Representing the significant contribution of the Registrul Auto Român (Romanian Automotive Register) to the efforts to combat the illegal car traffic, the benefits of this activity have appeared almost immediately: the finding of several vehicles with modified identity especially since the message that as of this moment there is an institution which has the arguments to oppose to the illegal car trafficking have led to Romania not being a destination country for the substituted vehicles.

By its attributions, by the qualities of the personnel involved and by the manner of serving of the vehicle holders, D.I.O.T.I. is the department of the Registrul Auto Român (Romanian Automotive Register) which brings its most important contribution to the development of the institution and to the creation of a most favorable image for the population. The decisions of D.I.O.T.I. the representatives regarding a vehicle go beyond the strict interest of the holder thereof and first of all intend to protect the interests of the society regarding the safety of the traffic and the environment protection.

Own activities carried out within the RAR representative offices:

Documents required for the activities of D.I.O.T.I.